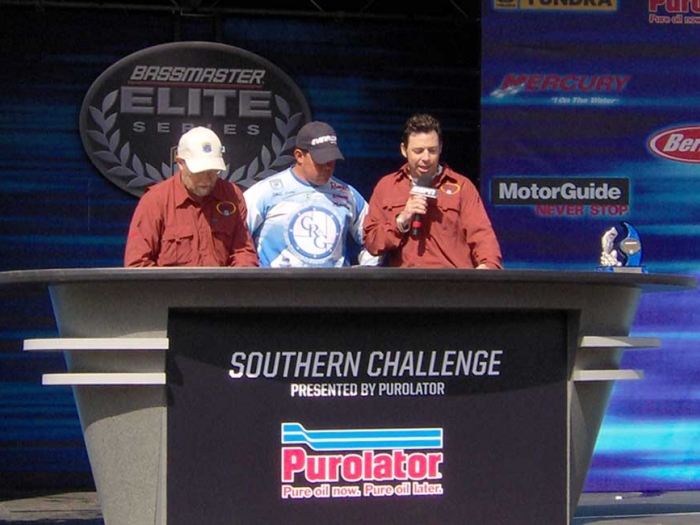 The Bassmaster Elite Series is the highest level of professional bass fishing tournaments. Competitors must qualify for the series through the Bass Pro Shops Bassmaster Opens or the B.A.S.S. Nation, and anglers who are already on the Elite Series must re-qualify each year by maintaining enough points throughout the season. The pro anglers compete all season for the opportunity to win points toward the Toyota Bassmaster Angler of the Year award and to qualify for the Bassmaster Classic.

Tournaments take place at various venues around the country. For the stage backdrops our solution was large hanging retractable banners that could be hung off the stage scaffolding with graphics that pull down during the event.  Each banner was 8ft wide by 10ft tall and were printed Dye Sublimation on a seamless PolyKnit fabric. The banners were installed into the retractable hardware units and pulled down during fish weigh-in’s and live TV awards telecasts.  Once the event ends the graphic is retracted into its secure steel enclosure and transported to the next event.

Each event had a main sponsor. In the early days we often didn’t know who the weekly sponsors would be until sometimes just prior to the event.  Weigh-ins and interviews would take place at an announcer desk on stage and another in a strategic location near the action.  We would layout and produce 62”w x 33”h Direct UV Printed Sponsor Signs that would be attached to each desk.  The signs were printed on 1/8” Black Sintra and shipped to the event in a one-way wooden shipper for protection.

In addition to large pull-down retractable banners for the stage and direct print signs for the desks, we produced other signs and custom banners that were used in hotels, around the vendor booths and other strategic locations throughout each event.